One bag of light sandwiches, thirteen writers, buckets of tears, and an incredible coincidence.

Travelling with my mother is unlike any other expedition.  She is a whole destination without any sort of journey needed.  So when she texted me the night before one of my most looked-forward-to and nerve-wracking trips of the year and said she’d made a ‘bag of light sandwiches’ for the train, I felt both comforted and terrified.  What on earth did she have in mind if we needed ‘light’ sandwiches?

Having posted the sandwich ‘situation’ on Facebook, a frenzy of questions ensued – what on earth was IN the ‘light’ sandwiches?  It turns out, as we set off from Hull Paragon Station, they involved ‘best ham and Moroccan tomatoes, with a lick of butter.’

And so the train headed for London, bound for two of the biggest book events I’d taken part in thus far – a talk about How to be Brave with the Royal Chelsea Pensioners, and the Orenda Roadshow in Waterstones Piccadilly with a host of esteemed and bestselling writers.

At Selby a lovely couple got on and sat opposite us.  We got chatting (my mother will talk to a wall) and they asked about our trip.  As I told her about my book events the lady – Jean – began to cry.  Full on tears.

“I know this story,” she said.  I was speechless.  How?  It turned out Jean had known the other survivor from the lifeboat, Ken Cooke, and lived in the same village as his grandchildren.  It felt like a reunion with an old friend.  She bought a copy of my book – much to the curiosity of other passengers, who I told, “It’s on Amazon! Click now!”- and I happily signed it for her.  When we went separate ways at King’s Cross, having exchanged numbers, there were more tears; it was like saying goodbye to dear friends.  I’ve always felt there’s no such thing as coincidence.  That fate has a firm hand in such things.  And I knew we’d all been in exactly the right place at exactly the right time.

It was on then to the Royal Chelsea Hospital, and the wonderful veterans who reside in the Grade I and II listed site.  They have served in Korea, the Falkland Islands, Cyprus, Northern Island and World War II, so it was an absolute honour to share with them the bravery of Grandad Colin, and read extracts from the book.  Emotional anyway from the surprise train ‘reunion’, I could barely keep it together as I shared the tragic death of Officer Scown, Colin’s guilt at losing it with another crew member, and the moment of rescue. 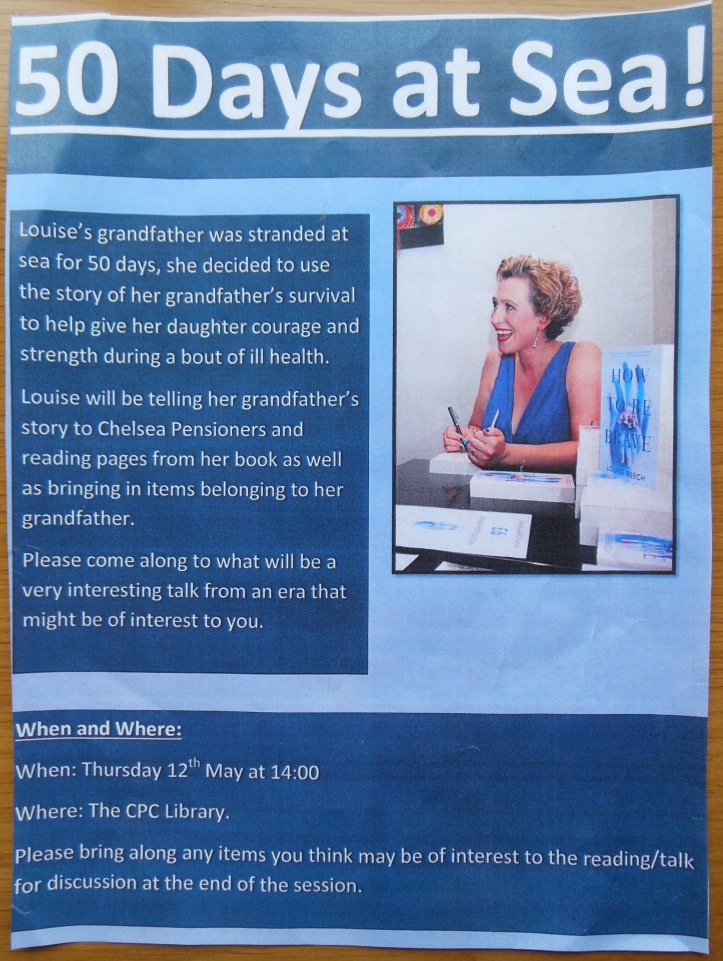 “I’ll never be able to show my face in Yorkshire again,” I joked between chokes.  But these men and women have witnessed such pain, and they were wonderful.  They shared tales of their life moments, of journeys across sea, of lost friends.  I’ll never forget it.  Grandad Colin’s brother’s great granddaughter Lauren joined us and we met for the first time.  “Can’t beat that Yorkshire grit,” she said, and it was as though we’d known each other for years.

Finally, after a quick bite, my mother and I set sail for Piccadilly Waterstones, the last leg of our trip.  Here, the hard-working and passionate Karen of Orenda Books had rounded up thirteen of her writers to share readings and chat with a rapt audience.  I met again the delightful Amanda Jennings, whose book launch (and book) I’d loved, the doesn’t-look-a-day-over-forty-five David Ross whose Head in a Book I enjoyed last year, and Paul Hardisty who’d come all the way from Australia.  (Not just for me, you understand, for the event.)

Then there were new friends to meet: lovely Yusuf Toropov who has championed How to be Brave endlessly and written one of the greatest literary works I’ve ever read; Steph Broadribb whose bounty hunter tales have me hungry for her debut; Michael Grothaus, whose font is quite different to mine; Matt Johnson who did the most moving read; gorgeous Kati Hiekkapelto who my mum said she ‘couldn’t take her eyes off’; Michael Stanley (at least the two lovely misters who are this one writer!); Su Bristow whose Sealskin sounds magical; and Michael J Malone who my mother asked, “What kind of writer are you?” and when he said, “A Scottish Writer,” she said, “A Sausage Writer?  Oh.  So what does that involve?” 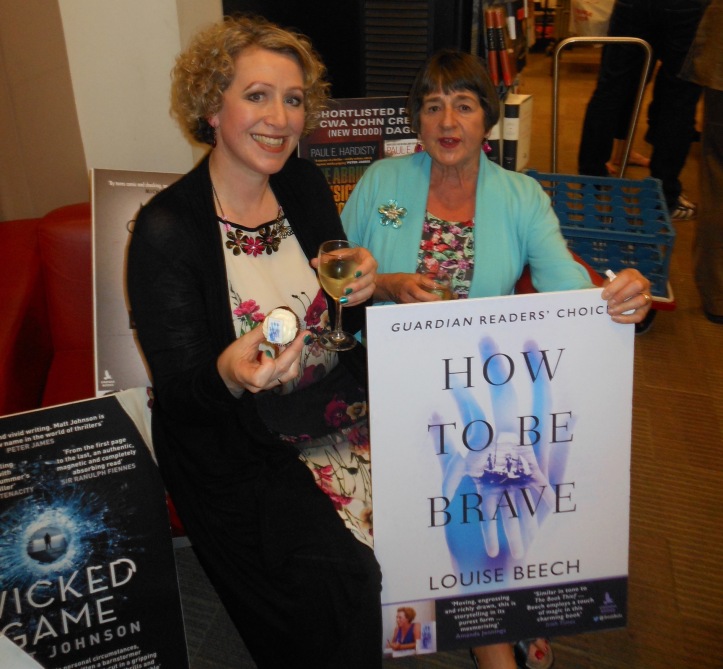 Yoko Ono turned up for the event.  Okay, she wandered into the store.  Same difference.  But that wasn’t as exciting as my meeting writers Jeanette Hewitt and Melissa Bailey.  Exclusion Zone and Beyond the Sea are two of my favourite reads this year, so to see them there was beyond incredible.  We hugged and I signed my book in a way Jeanette’s mum will truly love.  Also it was great to talk to Susi Holliday about the excitement of seeing bookshelves in stores and ‘knowing’ the writers.

And it’s always great to see those gems from the book blogging community.  “What’s a blogger?” my mum had asked on the train.  A lifesaver, I wanted to say.  I was touched to get a Pretty Woman-esque whoop whoop from Anne Cater and Nina Pottell during my introduction.  And to see Vicki Goldman (a writer also) and Liz Barnsley and Anne Williams (from Harroga- Wakefie- um, Wetherby!) and Steve Wright and Karen Cocking there too.  Always a joy.  Favourite writer Gill Paul sat on the front row with my mother and thankfully kept her in check.

Thank you to Karen Sullivan for steering her publishing ship so well, and letting me be part of its incredible crew.  I’ll never forget London last week.

My Aunt Jane (Grandad Colin’s only daughter) said quite profoundly, “It’s as though you’re steering your own lifeboat, collecting friends and memories along the way instead of provisions.”  She couldn’t be more right.  I’m just lucky enough to have a bag of ‘light’ sandwiches on my journey…